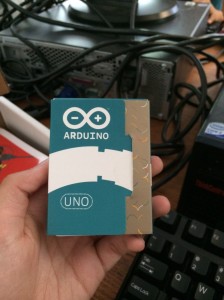 Recently we received Arduinos to fiddle with in class. It took a while to download all the programs (there were a few), but luckily we had instruction manuals to follow. Since the lesson was focused on hardware, we just had to build the circuits. As it was my first time doing anything like this, I learned a lot from doing to exercises. Additionally, there was code already written for the circuits so that we could watch the program run.

I managed to make a circuit with eight LEDs flashing intermittently, and I realized just how complicated all the outputs and inputs can get with all the different wires. I have a lot of respect for the people who can create that sort of stuff now; I was just following instructions, and other people do projects from scratch! Kudos to all the creative people out there who make their own Arduino projects!